For Jean Newman Glock, luxury isn’t about how much you spend; it’s about how much you see. It is about exploring one’s interests as exclusively and as in depth as possible. Experiential travel and insider access is all the rage now in luxury travel, but Glock, owner of JNG Worldwide in Washington, D.C., an affiliate of Connoisseur Travel, has been ahead of the curve for years. 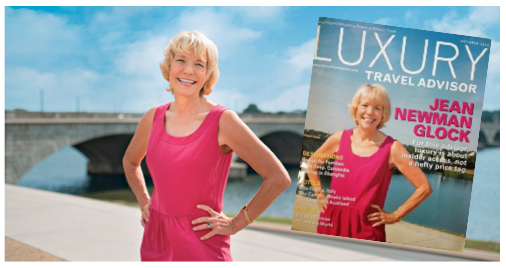 “The role of the travel consultant is to dig in and find out what their client likes and match a trip to their true interests,” she tells Luxury Travel Advisor. “It’s a new world. This is the golden age for travel consultants.”

A fresh face in the retail side of travel, having joined up with Connoisseur Travel in 2011, Glock has risen to the role with enormous success (to the tune of $1.5 million annually), all thanks to a secret weapon: 17 years of experience with the Smithsonian Institution’s travel department. “We were one of the largest nonprofit tour operators in the world,” she says. At one point they were running 300 departures a year with top tour operators in the world. Each departure was accompanied by an expert in their field. This opportunity armed Glock with an arsenal of the world’s best and brightest minds, so when she was ready for a new challenge, she knew she could sell travel with a deep, insider edge.

It seems her secret weapon has been a smash success. In just two short years of selling luxury travel, she has managed to curate some incredible itineraries. She tells us of one group that was interested in contemporary art in Shanghai. Glock was able to secure access to private galleries in that city, along with interactions with art experts while visiting the galleries. In another instance, a client said he adores Versailles. Glock was able to get him into the palace for a private tour with a curator who unlocked doors that are closed to the public. “I have access to a lot of experts I’ve met over the years,” she says. This is one of the keys to her success—building relationships with politicians, curators, historians and other top-level experts who can enhance the experiences of her clients.

Always in pursuit of personal growth, Glock launched JNG Worldwide in March 2013 to link her agent sales through Connoisseur. JNG Worldwide is her personal project, from which she spotlights her successful writing career for outlets such as The Huffington Post and A Luxury Travel Blog, and her social media know-how.

While travel has always been a deep interest for Glock, selling it wasn’t always the clear path. Raised in rural North Carolina, she first got a taste of the international world when her boarding school arranged a trip to Greece. “The moment I climbed the Acropolis and realized that Socrates and Alexander the Great had stood on these same stones and viewed Athens from the same perspective, I knew that this is what I wanted to do in a thousand other places,” she says. “I never looked back.”

Though she had already been accepted to Duke University, her college plans took a dramatic turn when she heard about a school in Lugano, Switzerland, that offered academic travel every semester. This would be the spark that ignited Glock’s career path and lifestyle going forward. Her adventures took her to Egypt with top local politicians; she met Marshal Josip Broz Tito when he was ruling Yugoslavia; and studied German with an actress in Germany. “It was incredible exposure,” she says.

After returning to the United States from Switzerland, she went on to achieve her masters degree from Georgetown in science and foreign service on Middle Eastern politics. This launched a 12-year career in geopolitics of oil and a history of the region. This was when she began her career at the Smithsonian, which brought her to where she is today.

After 17 years with the Smithsonian she was ready for new challenges. “The retail world was at a real precipice. It was becoming something very new and exciting. I wanted to try retail versus nonprofit and see how it was evolving with the Internet.” It was at this point that she hooked up with Connoisseur Travel, which offered her the freedom to evolve into the position of director of global relations. In this position, she has grown Connoisseur’s leisure sales 50 percent year-over-year since the time she started. Today Connoisseur’s leisure sales are around $12 million annually. “That combined everything that I love, allowing me to use my expertise traveling with the State Department, as well as pressing social media full speed ahead. Now it has evolved so that I travel, write and arrange trips for clients.” Sounds like a dream job, and it is.

Glock’s luxury consulting sales style comes from her own manner of travel; she’s always tested her comfort level and pushed herself to uncover new passions.

The mark of a successful trip is when she finds a perfect match for her clients’ specific travel interests. Most recently, she returned from a visit to England with Tudors’ author Alison Weir. Glock met Weir at a book signing at the Smithsonian, and from there, a friendship formed. She asked Weir to give a talk to a tour group in England. Weir eagerly agreed to join the entire tour. “She was beyond incredible and afterward she called and said she would set up her own tour company,” Glock says. “Today we are partners. She takes a maximum of 30 people on tours and gives them behind-the-scene access at all the Tudor sites in England.” As of now Weir does just one tour a year and is sold out through 2015. The waitlist is 40-deep. “All of these trips may not cost a fortune, but they match clients to a trip of their true interest, which is the role of the travel consultant.”

It is also part of the advisor’s role to know their clients’ interests, sometimes better than the clients. “If someone tells me they are dying to go to Bora Bora to stay in an overwater bungalow, I have to think about what the client really wants,” she says. “If I know they will die without Internet access and that the water will drive them crazy, I have to open their eyes. Do they want the trip for bragging rights, or do I need to find a trip that is a better match?”

Her client base is a mix, as she describes it. The average age is between 45 and 55 years old, and most of them are still working in their respective affluent fields. “The majority are looking for experiential trips,” she says. For her clients she is available 24/7, her phone attached to her like a lifeline. “Wherever I am, I am connected and dealing with it,” she says.

Being part of Connoisseur Travel means working closely with consortium Signature Travel Network, which Glock believes to be one of the strongest assets to owning a successful agency. “It is one of the most technologically forward-thinking consortia,” she says. “They are at the forefront of really honing into certain apps and destination marketing, not just through e-mail, but through apps that I could use on social media. They allow the agents to develop their brands with their technology tools.”

It’s not news that social media and the Internet have changed the luxury travel game, but once again Glock was leading the pack here. With more than 40,000 followers on Twitter, her presence extends far and wide. While it is hard to gauge her ROI from Twitter, she knows of a few examples where she has gotten business because of her well-advertised knowledge through the platform. “A couple saw an article I wrote about private jet travel and direct-messaged me on Twitter asking if I had done the trip. They called me and booked an around-the-world jet tour,” she says. “Three months later a Turkish official called me and did the same thing.”

In fact, it was through Twitter that Glock made her connections with The Huffington Post. They had read her tweets about private jet travel and ship/yacht charters and asked if she would like to join the team. “The international reach through my Huffington Post writing, and spreading these links through Twitter and Facebook, has been incredible. I have reached new, ultra-high-end clients all over the world, as well as in the U.S.,” she says.

“I don’t like focusing on social media, though. It’s nice and it’s there, but all ships rise. If travel experts are on social media sharing that we have something valuable to offer, we will be successful.”

Where Glock finds social media most successful is with suppliers. “I find social media wonderful,” she says. “Half of my tweets are about suppliers.” The marketing director of a new private jet tour group InTrav stumbled upon her article on private jet travel on Twitter and launched a dialogue. Later Glock was invited on their inaugural departure, a $100,000 trip. “Their managing director says to me that it all started with a tweet,” she says.

That being said, in-person meetings with suppliers hold the weight in terms of building connections. Glock has long-term relationships with her suppliers. She is preferred with Four Seasons, Ritz-Carlton and Orient-Express.

To travel luxuriously is to never stop learning, according to Glock. An avid adventurer and certified diver, she loves to push boundaries in order to make lasting travel memories. “You have to stretch your comfort zone a little. Get your clients excited.”

Going forward, Glock will continue to test herself in order to learn as much as she can so she can keep crafting exquisite trips for her VIP clients. “I would love to see myself continue to write,” she says. “I enjoy consulting with others in the industry, sharing what I have learned about social media and helping people learn that it’s not a behemoth that you can’t deal with.”

And, of course, there is no end to Glock’s travel career. “If I’m not doing these experiences alongside my clients, then I’m just writing about [them],” she says.