Many Romanov sites in St. Petersburg and nearby Tsarskoye Selo (Pushkin) have been restored in the past few years, but a few remain untouched.  I had planned to write an article about “Reinventing the Romanovs” as Russia continues to restore and open many new palaces.  But as often happens to me, my plans shifted once I arrived.  Here is a glimpse of the forgotten sites…yet to be touched. 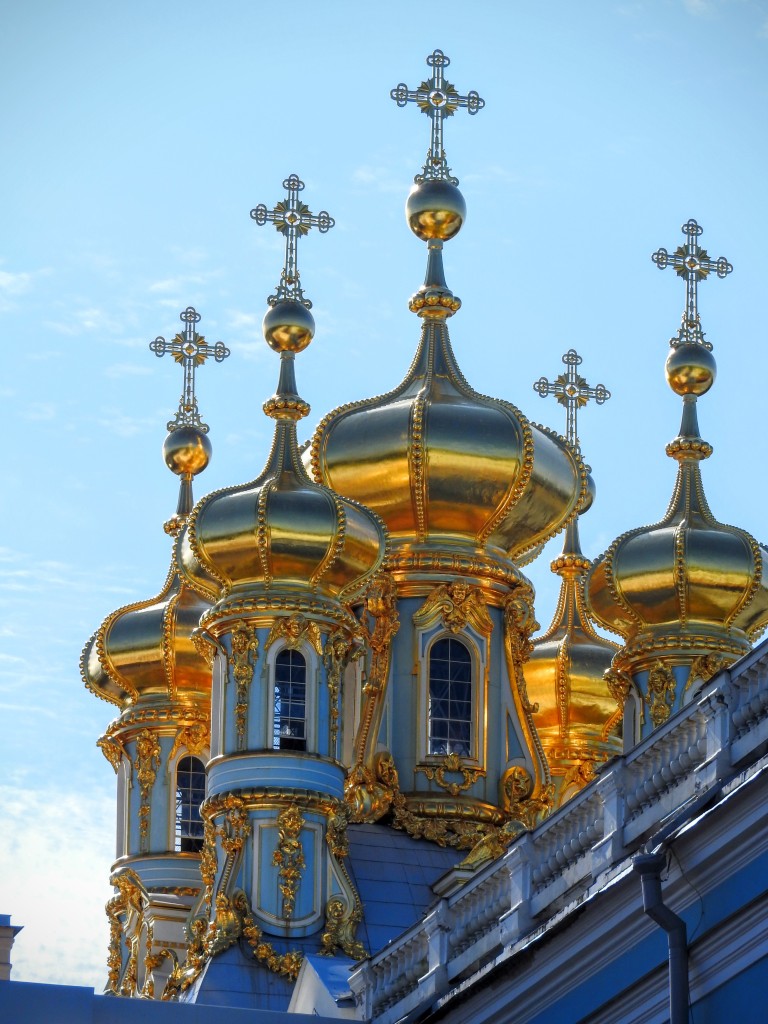 This was my fifth visit to St. Petersburg, (formerly Petrograd and Leningrad) in the past 14 months.   My last post was about the highlights of the former Imperial city. But this visit, I was searching for new sites, those not usually visited by tourists.

What followed were three of the most exciting days I have had in my 25-year travel career.   Here are a few of the highlights and many more articles and research to come!

As we sailed into the harbor, we were welcomed with the following sign. Translated: Leningrad. 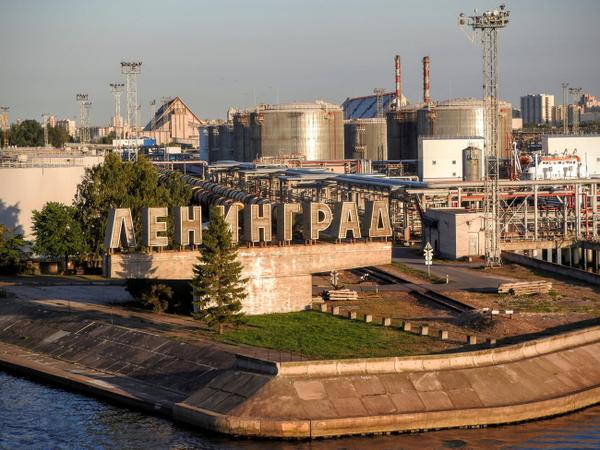 Some signs are harder to change than others….this one says ” Leningrad”.

Our first destination was Peterhof.  Peter the Great’s answer to Versailles is a gleaming, golden palace and park right on the Gulf of Finland.  We passed President Putin’s home, formerly the Constantine Palace. 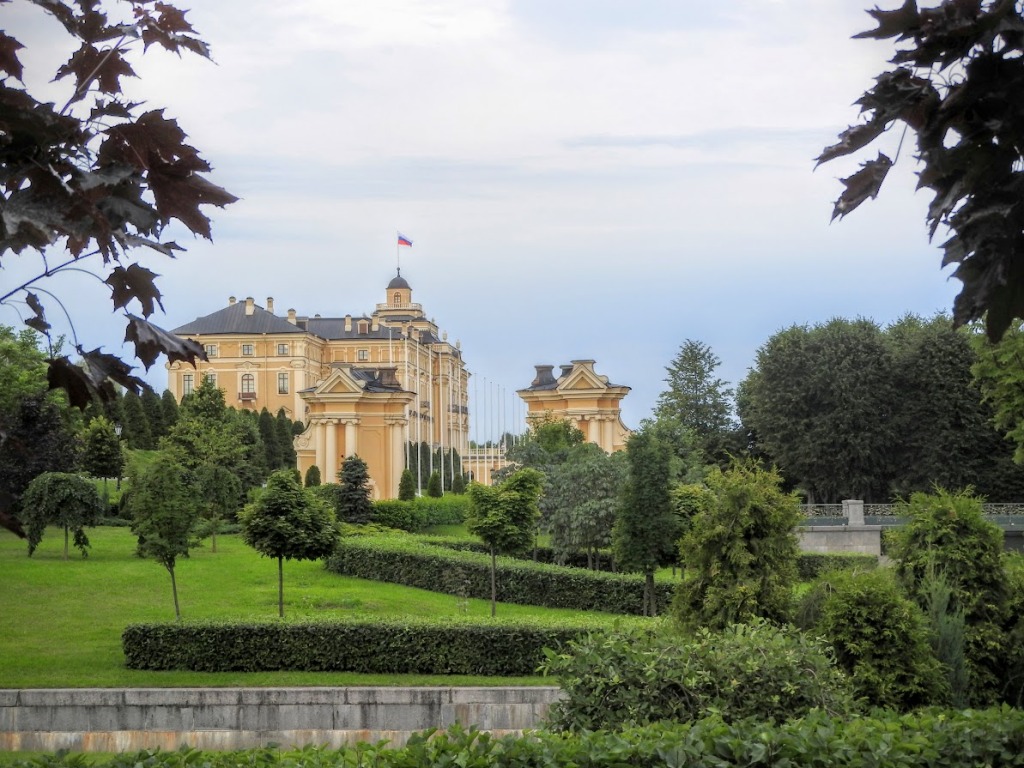 As we were on the road to Peterhof, our guide suggested we pull off on a dirt road and look for something.  She had heard about a royal palace here but never seen it.  After driving a few miles down less and less of a road, we found it.  Overgrown, guard dogs lounging in the yard and threatening signs on the doors.  Undeterred, we banged on the door and a lone, young guard came out.  We were refused entry at first, but after discussions (and a little money), we were allowed in to explore from top to bottom. It was a former Romanov Palace, the Znamensky Palace, that had been used after the revolution as a hotel for workers,  but then abandoned.  Eerie, filthy and evocative, we spent hours opening every door.  Here are a few photos and many more articles coming about this Royal Palace right on the Gulf of Finland. 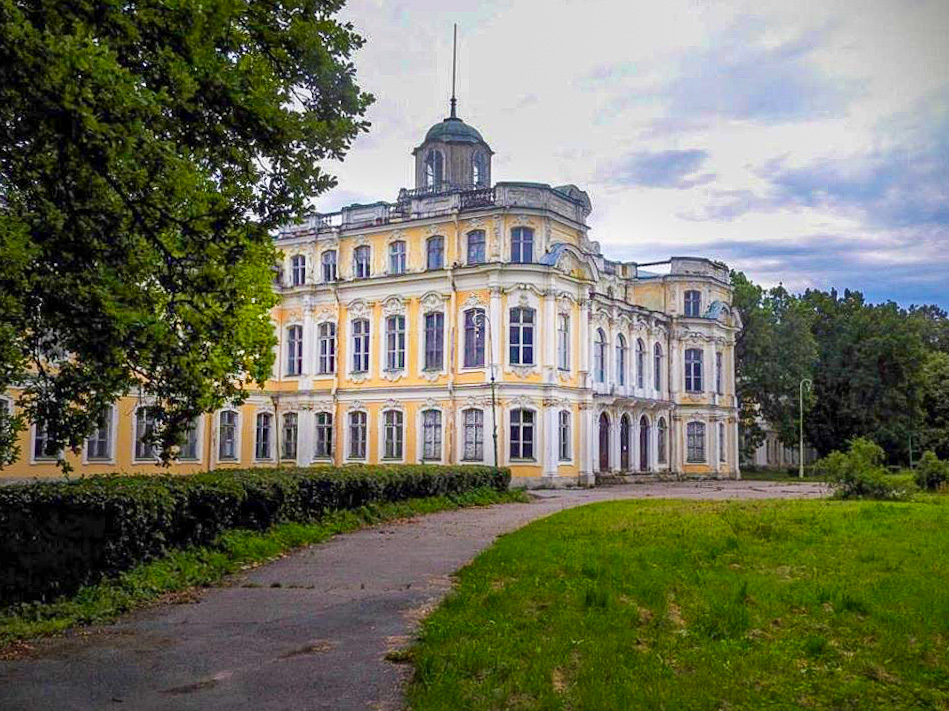 Walkway to the Palace 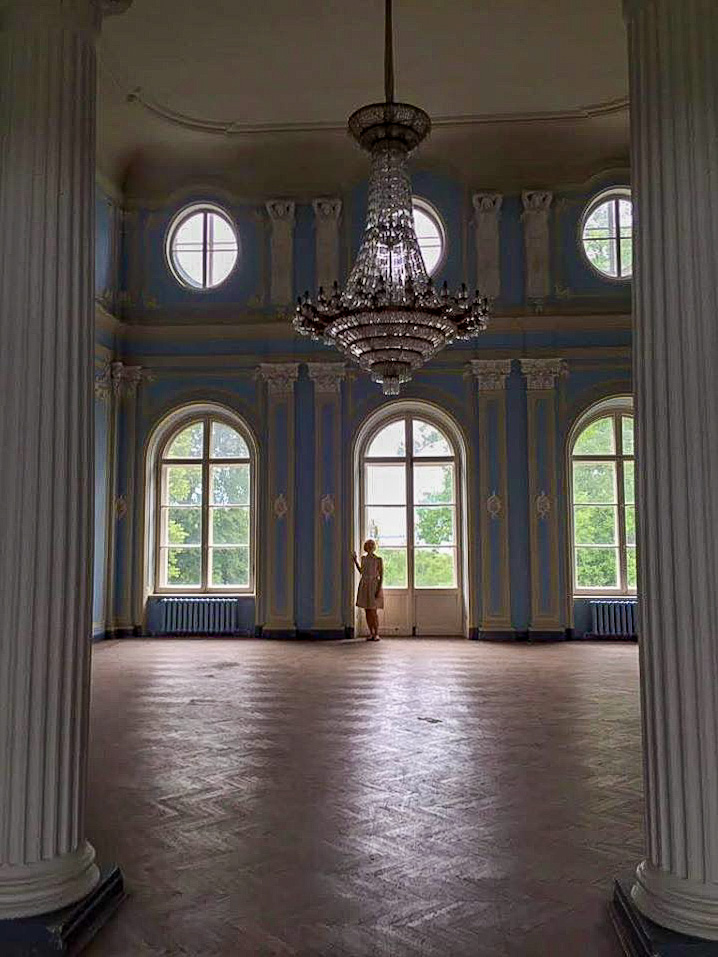 And when we arrived in Peterhof, right next to the gloriously restored Palace, stood the former Royal Stables of Nicolas II.  Untouched, with shell damage still very evident from the Siege of Leningrad during World War II. 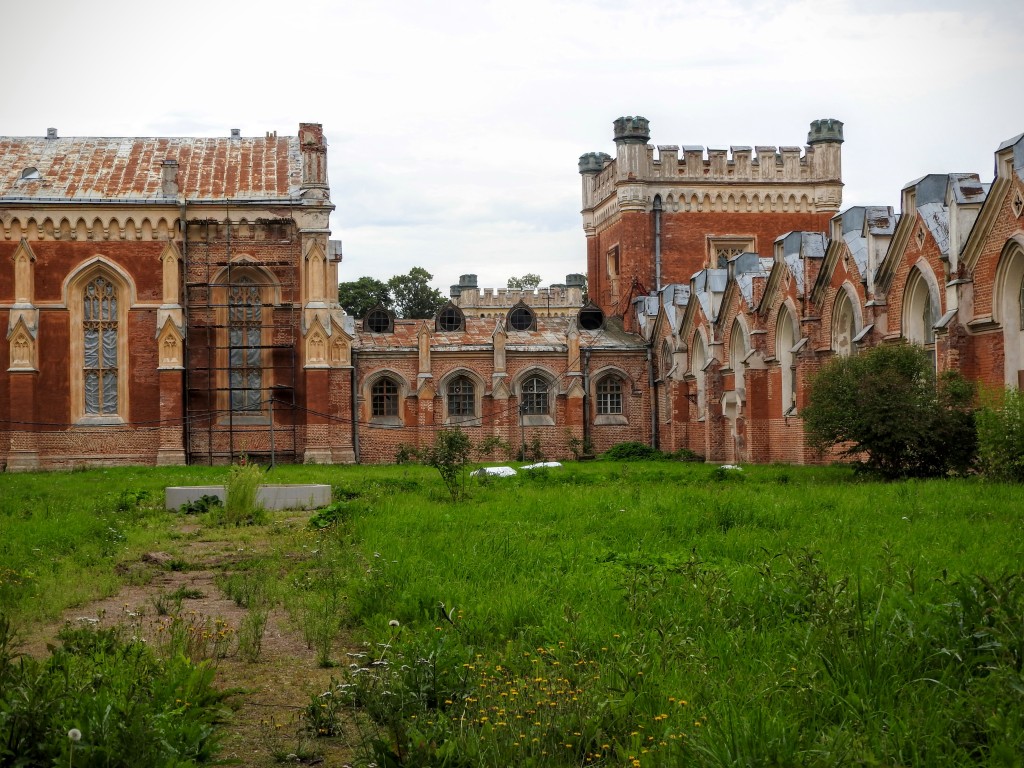 Former Royal Stables, next to Peterhof 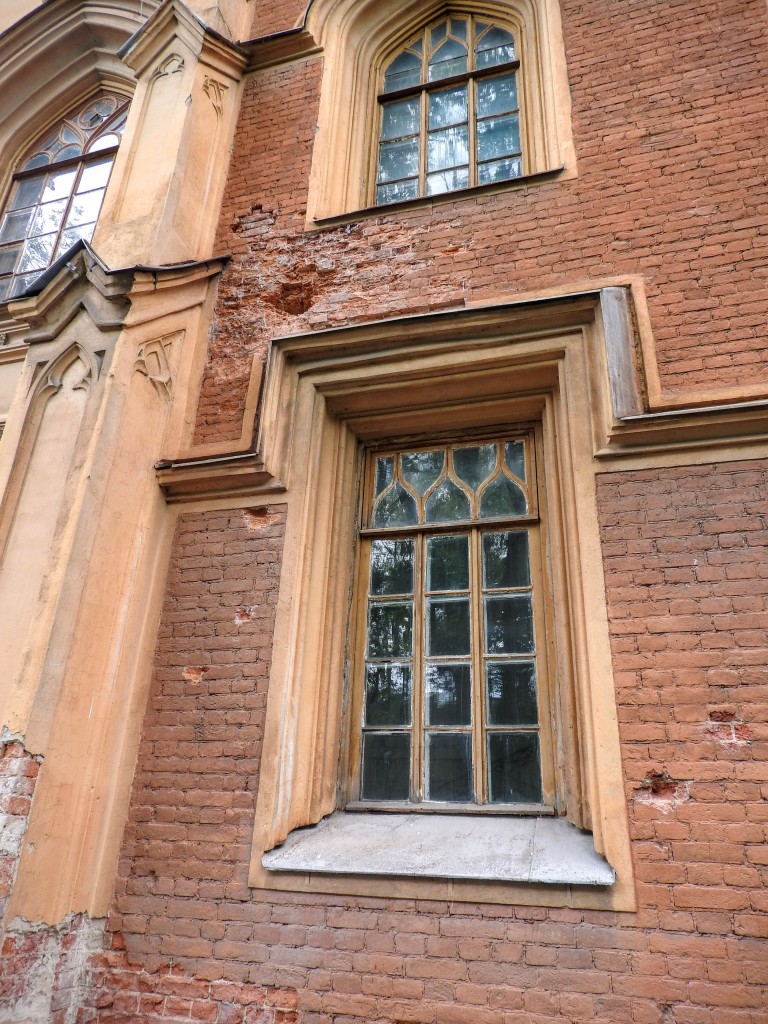 Close up of shell damage from Siege of Leningrad World War II Royal Stables in center of St. Petersburg

Right in the center of St. Petersburg we also discovered the abandoned royal stables of Grand Duke Michael.  His cipher still guarding the cast-iron gate. 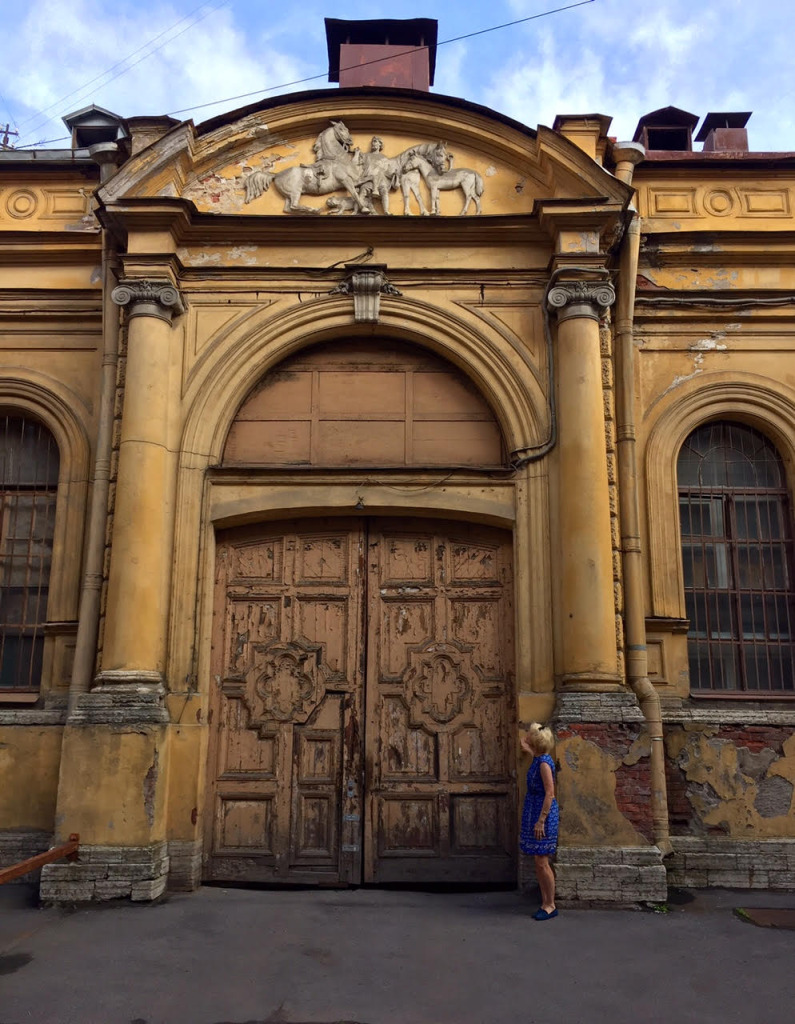 Royal Stables of Grand Duke Michael. Abandoned in the center of St. Petersburg 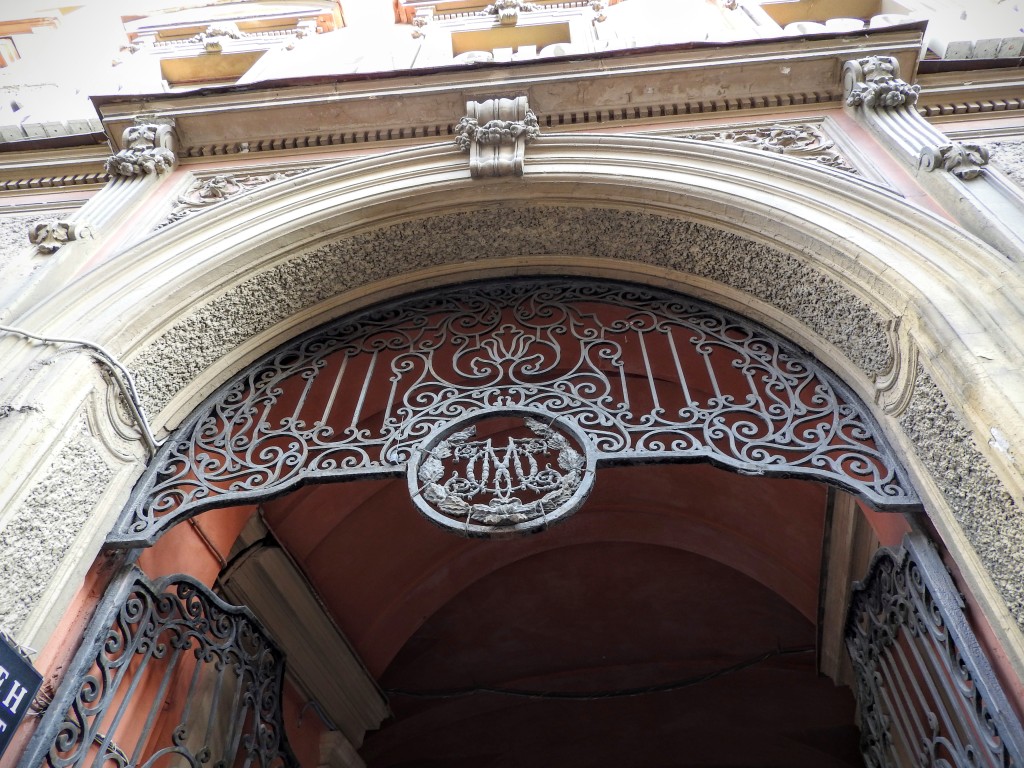 The Alexander Palace and Gardens 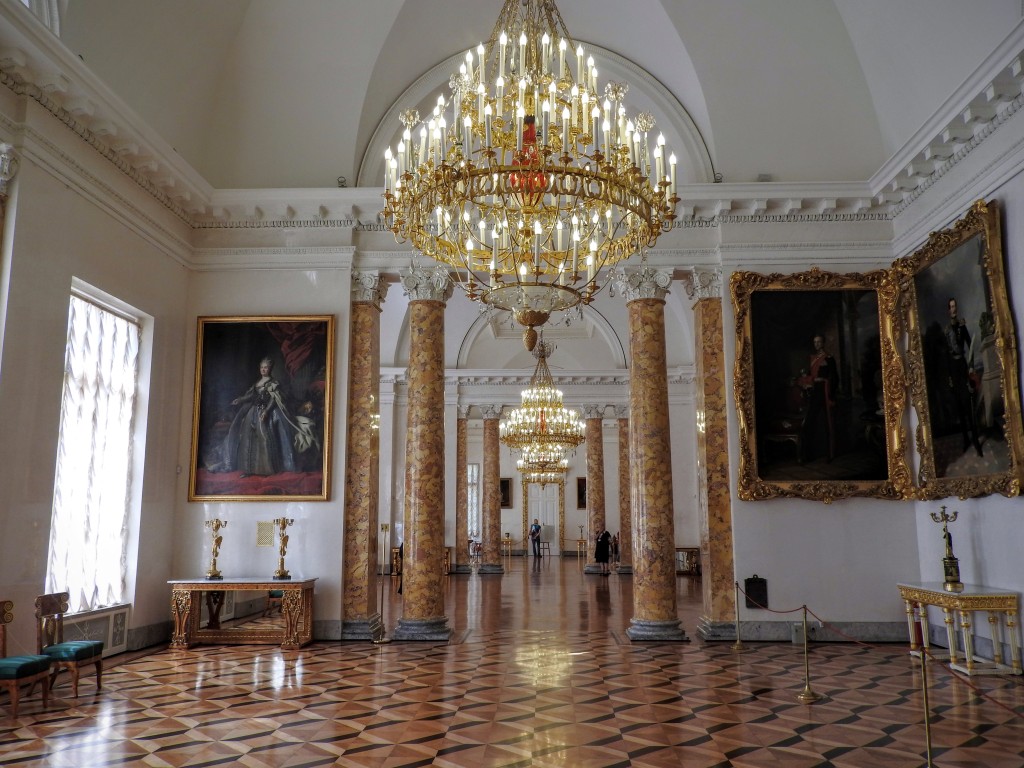 Interior Alexander Palace and room from which Tsar Nicolas II and his family left their home for exile and execution.

But our next to last visit was the most spectacular.  In Pushkin, or Tsarskoye Selo, just a few miles outside of St. Petersburg, when other busses were unloaded at the Catherine Palace, we turned right.  I wanted to revisit the Alexander Palace and walk the gardens.

Alexander Palace was the birthplace and final home or Nicolas II and his family.  You can see below the doorway through which they left on their way to exile and execution.  The poignancy of this site is overwhelming.

I knew it had closed on August 1 for a major renovation, but often closed has different meanings in Russia…..depending on your persistence.   And this time we succeeded in entering the palace and more importantly, finding some new treasures in the gardens.  See below for some of our finds in the house and gardens. There is little left in the Palace and some of the personal items and furniture of the family have been temporarily moved to the Catherine Palace.   They have begun a total renovation and plan on reopening this coming summer of 2020. 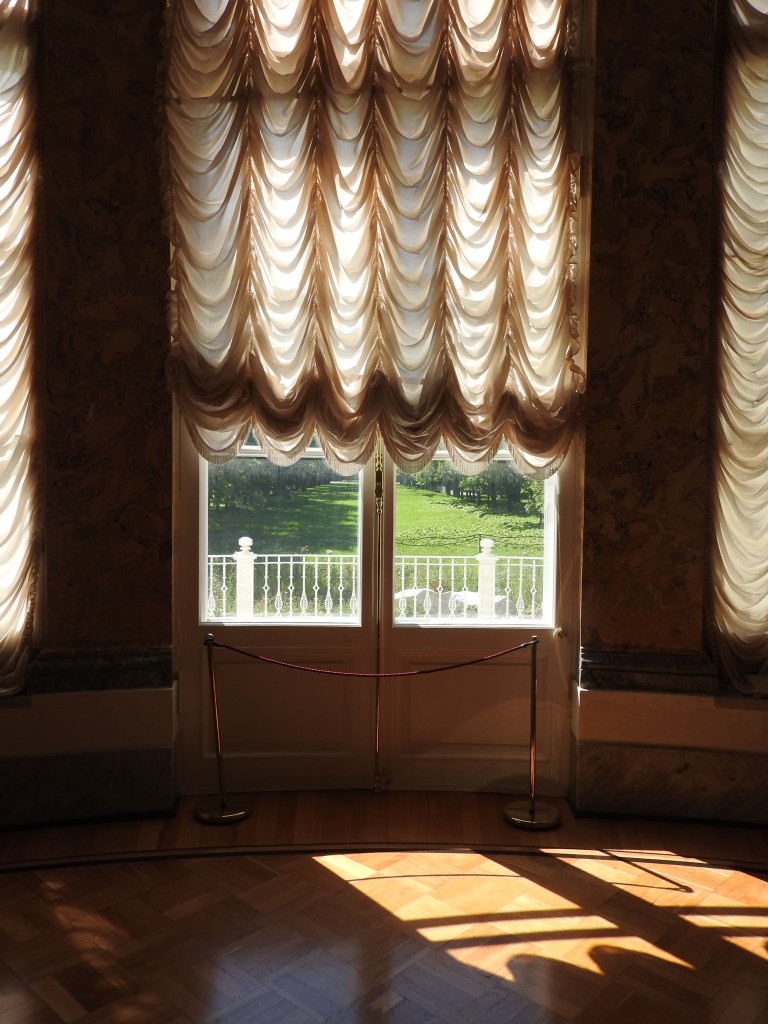 This is the door through which Nicolas II and his family left the Alexander Palace for the last time. 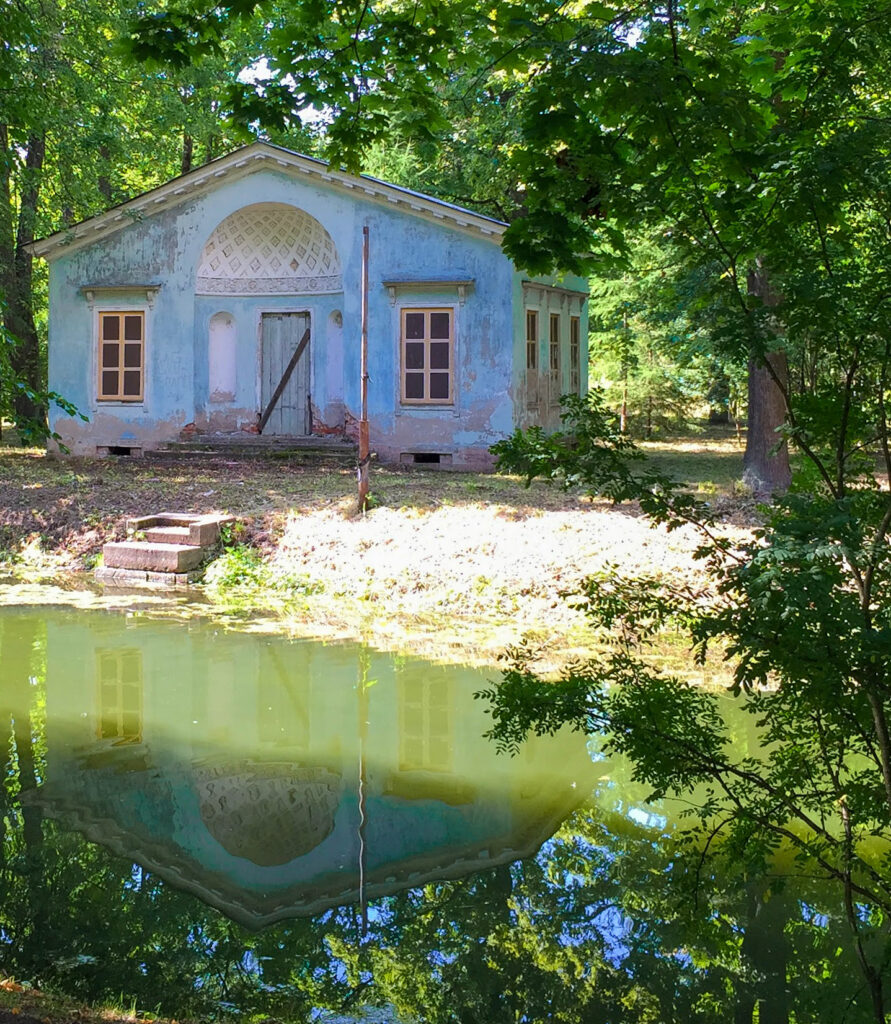 The children’s playhouse in Alexander Park, just as it was left in 1917.

Our final stop was an abandoned village complex right next door to the Alexander Palace.  This was the former Fiodorovsky Village, built by Nicolas II and used as a hospital during World War I.  It was at this hospital that Empress Alexandra and her two oldest daughters were nurses during the war.  The hospital and Cathedral in this village are empty now and very overgrown but the gothic design preferred by Nicolas is still evident.  We walked the paths the family must have walked to get to the hospital.  Little has been touched here since 1917. 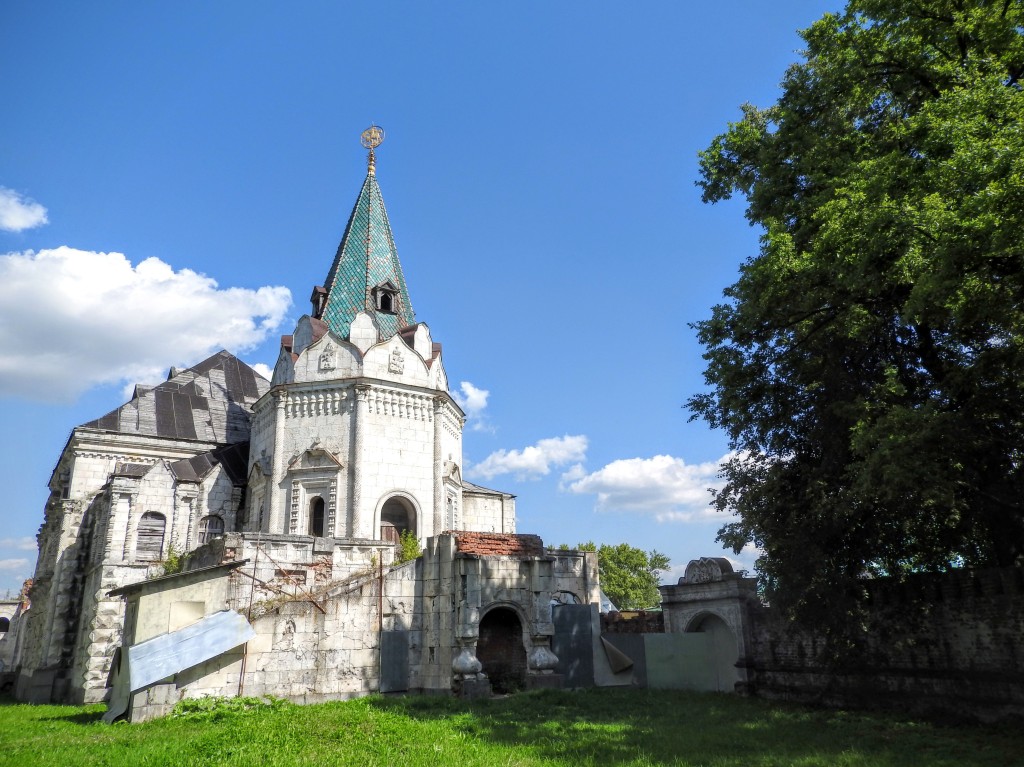 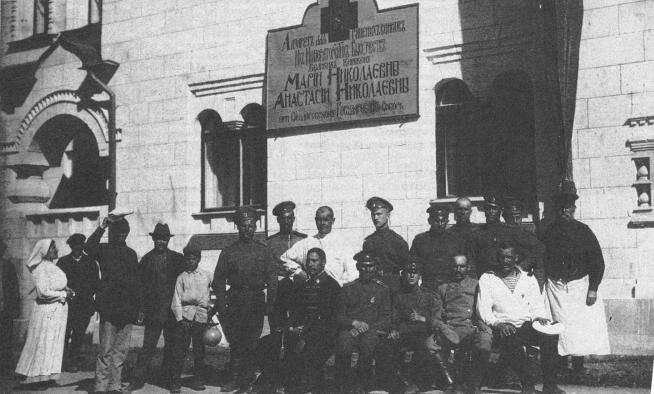 Fiodorovsky when it was a hospital during World War I. 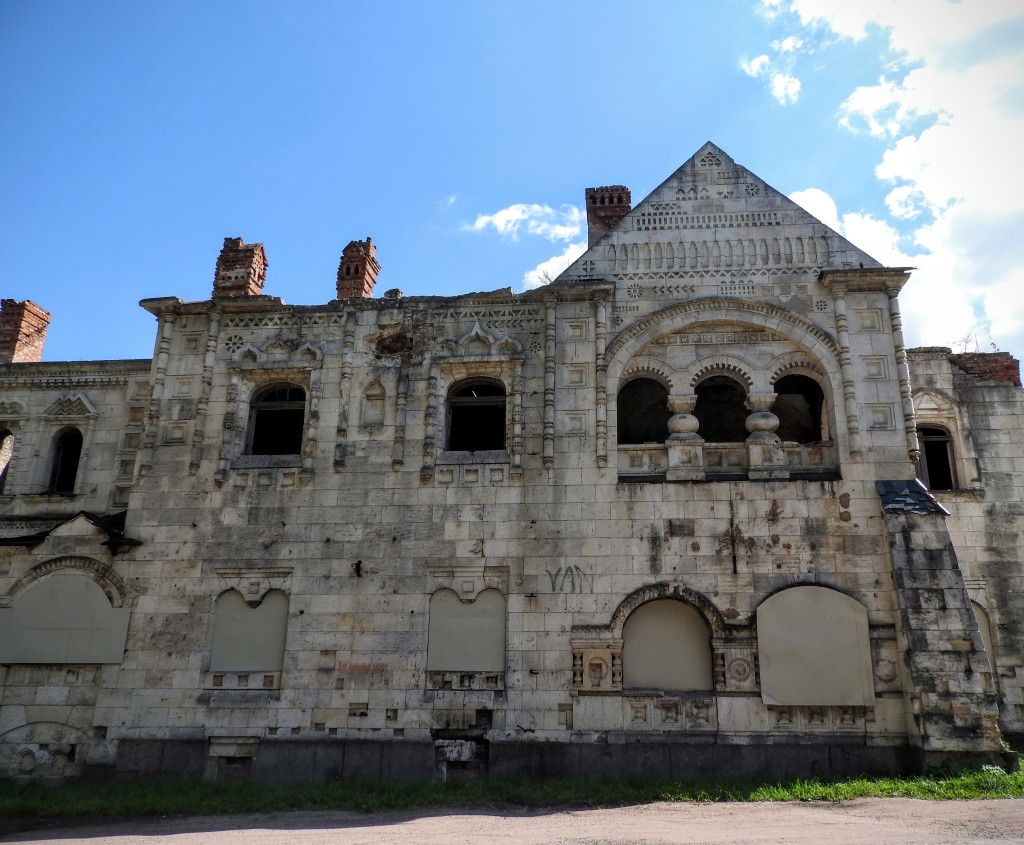 Same spot today as in the previous photo. 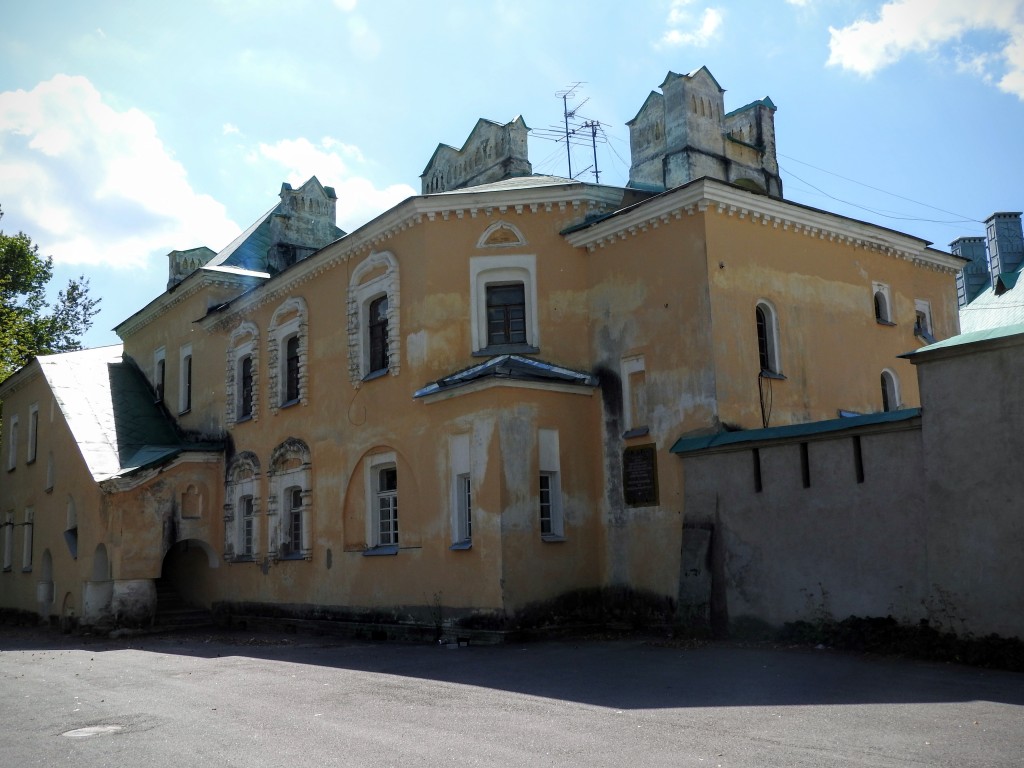 Visiting the opulent restored palaces of St. Petersburg is impressive and a must. But through these untouched sites, I walked into history and found the shadows of the Romanovs.

0 thoughts on “Forgotten St. Petersburg: Shadows of the Romanovs”