The Ultimate Safari...in One Morning

Traveling by Private Jet with Bushtracks Expeditions November 2, 2016 By Jean One response

“Watching the crossing of the Mara River this morning surpassed all my previous safaris…combined.”  Author Jared Diamond September 9. 2016

Let me back up. Our private jet group had landed in Kenya from Ethiopia the day before Jared’s safari of a lifetime. Greeted on the runway by the Masai and our guides, we were ready for adventure. That evening our first drive on the private concession of our camp, Kichwa Tempo, was exciting. Elephants crossing a small river and a lone lion at sunset watching us from a tree above, were all at amazingly close range. Our group of five asked Timothy, our Masai guide, how he could impress us tomorrow after such a start. He smiled. 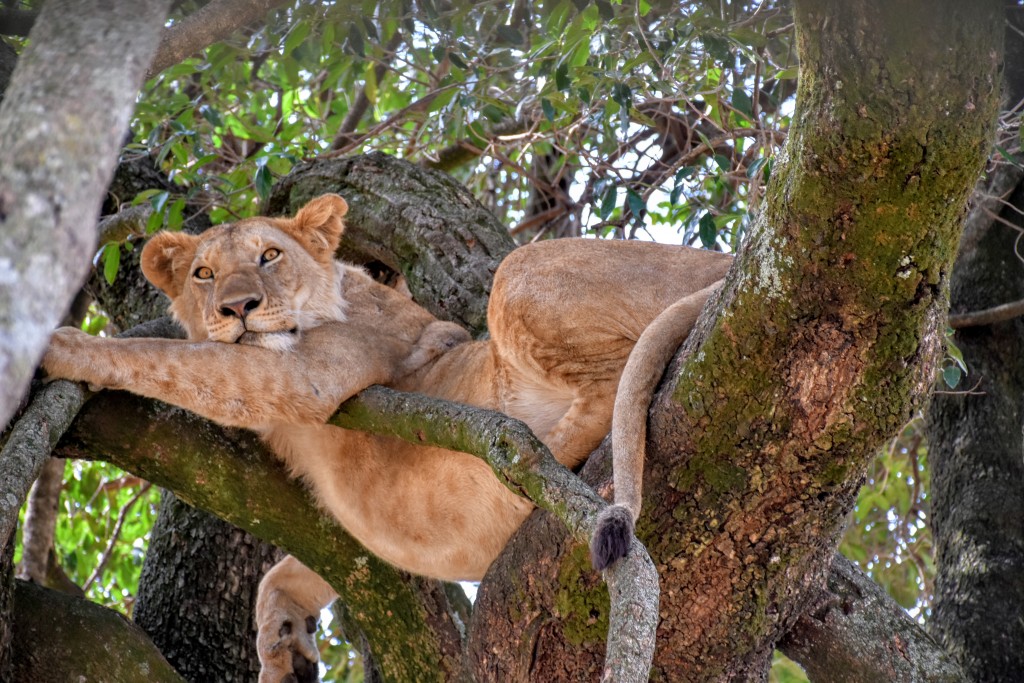 Our first sighting after landing in Kenya with Bushtracks Expeditions.

The next morning, the sound of lions in the distance and blue monkeys, much closer to our tents, woke us up. Game drives are best before breakfast when the Mara is waking up. Blankets for cover until the heat of the sun warmed us, coffee to wake up and we were off. This was our first trip into the Masai Mara National Reserve. The first zebras spotted excited us, a hippo lounged near our camp and we all clicked away. But then Timothy got a call on his radio. There appeared to be some herds moving toward a previous crossing point on the Mara River. Would we be game for driving there and waiting, knowing that it may be for naught? We all agreed to give it a shot. 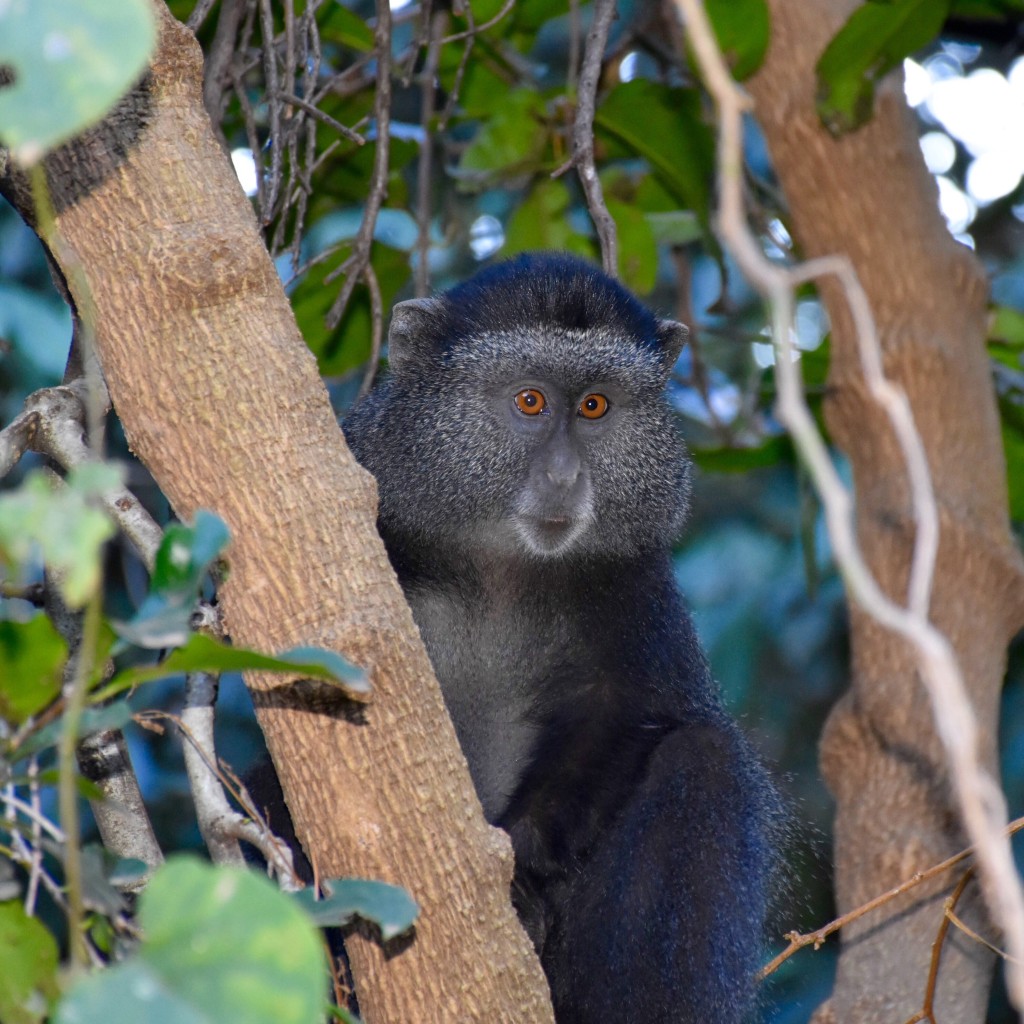 Right outside my tent, my watchman.

I had always heard that the crossing of the Mara River during the Great Migration was one of nature’s most spectacular sights. I could wait all day.

We arrived at a good spot for viewing and there were a few elephants with two young calves, a few sleeping hippos and one very large crocodile waiting in the river. 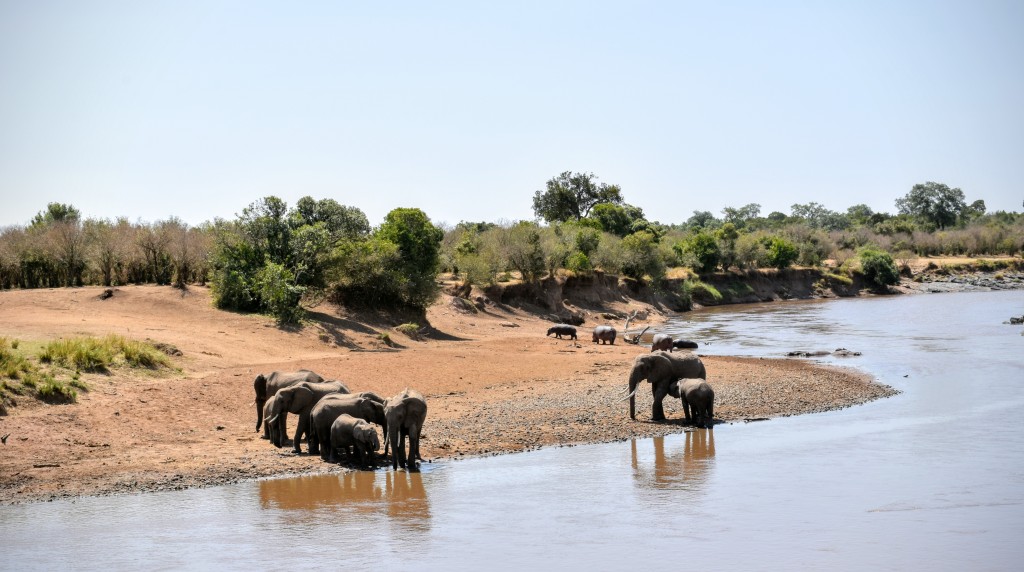 All seemed quiet when we arrived at the potential crossing.

After a short while the elephants crossed, protecting their young from the crocodile. We cheered them on and were all relieved when they safely crossed. But the “spectacular” was still to come. 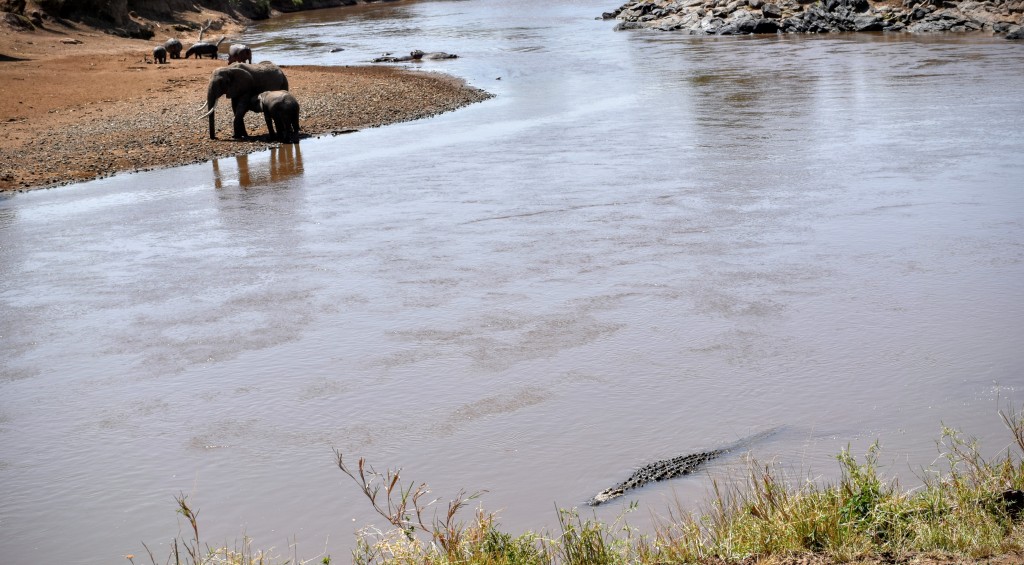 Notice the crocodile waiting in the foreground. 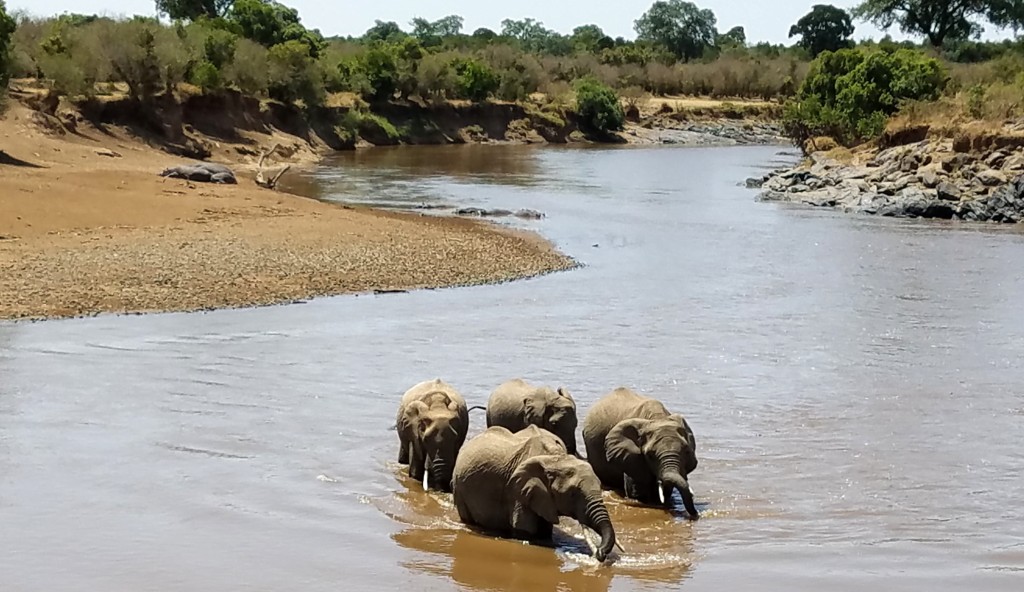 A safe crossing for all the elephants, including a week old calf.

A few minutes later the zebras and gazelles arrived. They stood about drinking a little and assessing the situation. We continued to film and click every movement. Timothy told us to be ready. Then the wildebeests arrived and this must have made a quorum, because crocodiles or not, they all decided to cross en masse. Nature’s spectacle had begun. The gazelle glided across as in a ballet, the wildebeest thumped across a little more clumsily and the zebra galloped to their own tune. It was magnificent. This is what travelers dream about when they think of a safari.

Assessing the situation before the mayhem began.

The crocodile did kill one of the first wildebeest and a few of the younger gazelles became separated from their mothers on the far side of the river. Their cries were heartbreaking and some crossed again in reverse in search of their mothers. In the confusion of the many species, this left them alone and stranded after all had crossed.

As quickly as it had begun, the quiet returned, save for the cries of the few tiny lost gazelle and the croc waiting in the river for his  next victim. The hippos were still asleep on the beach, barely disturbed by the thousands of animals passing by in a controlled chaos. The mass of animals on the far side of the river had formed an orderly line and continued their trek on the “Great Migration” and life on the Mara slowed down again. 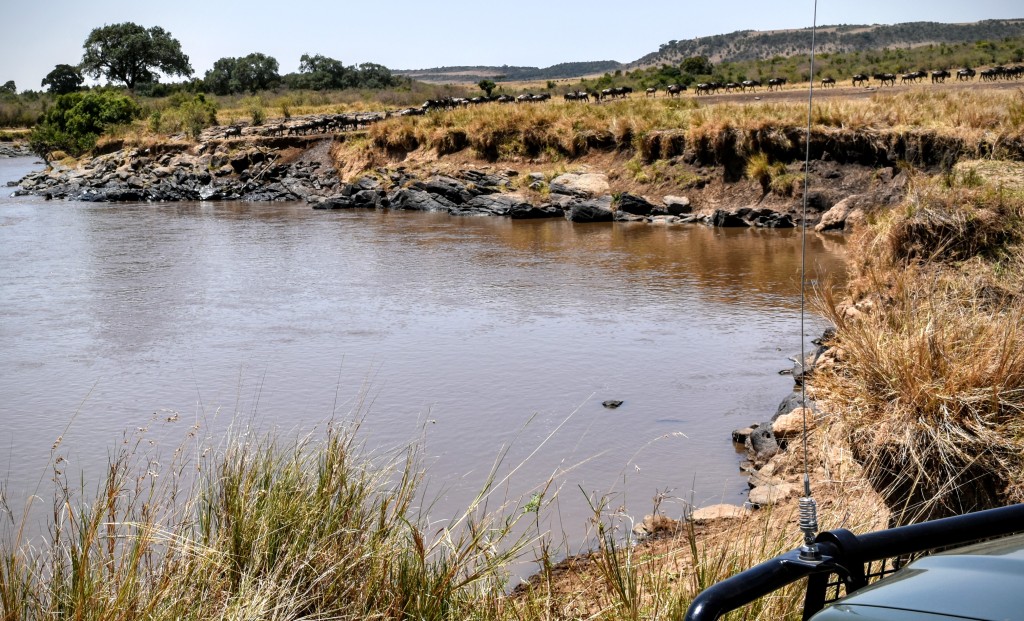 Thank you Bushtracks Expeditions. I can’t wait to see what you show me on my next safari. I hope many others can experience the safari of a lifetime…all in one single morning.

One thought on “The Ultimate Safari…in One Morning”