Visiting Russia four times in the past year as the Ukraine crisis unfolded was insightful. For current events, but also for a look at what sites are being restored, opened and primed for tourists. This article is about Moscow, my last was St. Petersburg.

Interpreting history, both current and past is challenging for all tourists and no where more so than in Russia.  I had the privilege of traveling under the expert guidance of Viking River Cruises.  Viking is the Russia expert-their connections are unsurpassed for both the new and repeat visitor. I thank them for the extraordinary access they arranged for all my visits. 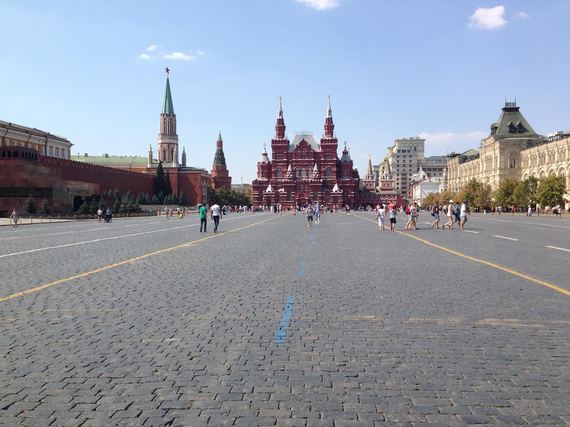 The sites on everyone’s itinerary in Moscow include the Kremlin, the iconic Red Square, and for those old enough to remember the Soviet May Day marches, a walk along the square brings back memories of the Cold War. But today, a visit to the old Soviet department store of GUM brings no such thoughts. The designers and store are almost indistinguishable from those in Paris and the shoppers equally sophisticated. Though it is not on my list for veteran tourists, take a glance in. I will assume you have been driven to the top of Sparrow Hills for the panoramic view, have queued to see Lenin in his tomb and visited the Kremlin and several cathedrals there. So what’s next?

Within the walls of the Kremlin and housed in the Armory Museum, this treasure trove is a must see and is not included on most first visits. The history of this collection, not to mention the specific jewels is a capsule view of Russia and the Soviet Union of the 20th century. As with so much in Russia, this collection began with Peter the Great who introduced the concept gaining credence in the west that a some of a country’s most valuable jewels and gems belonged not just to the ruler, but to the country, or “State Jewels”. Thus was born the collection of Russia’s Crown Jewels that is now partially housed in the Diamond Fund. Originally in the Hermitage, they were transferred to Moscow as German troops neared St. Petersburg in World War I. They were stored in the vaults there until the mid-1920s when over half the collection was auctioned through various sources in the West to finance Soviet industrialization. Today, many of Russia new oligarchs are seeking to purchase and return many of these treasures home, as in the newly opened Faberge Museum in St. Petersburg. The story of these auctions and the dispersal of these collections is one of the great treasure hunts of today. 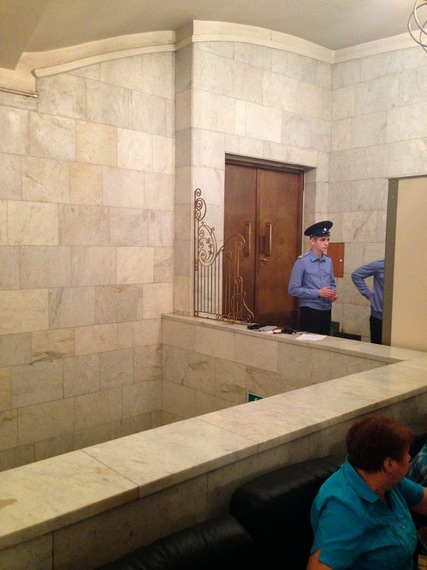 The well secured entrance to the Diamond Fund. No photos allowed inside. 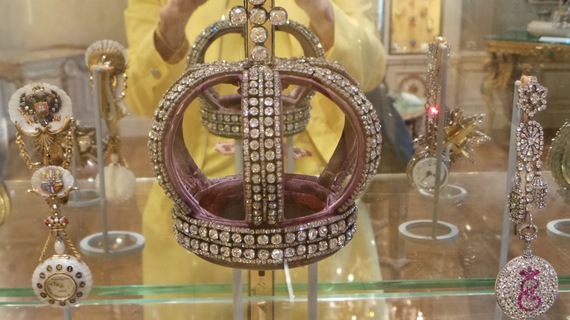 Museum of 1812 or Battle of Borodino

An amazing new museum with state of the art displays right off Red Square. This museum, also known as the Museum of 1812, commemorates Russia’s victory over Napoleon. The displays of the weaponry and uniforms of the Grand Army of France, juxtaposed with the costumes and basic weaponry of the serfs fighting against them are dramatic. Russia’s pride in their victory against the “undefeatable” Napoleon is still strong today. A David and Goliath story, sort of. The paintings of a dejected Napoleon camped in one of the Kremlin cathedrals and many of his personal effects are evocative. His field bed with Frette linens, his state of the art kitchen cart and most dramatic, the one man sleigh that he purportedly used to flee the front in Moscow, leaving his troops without a commander. 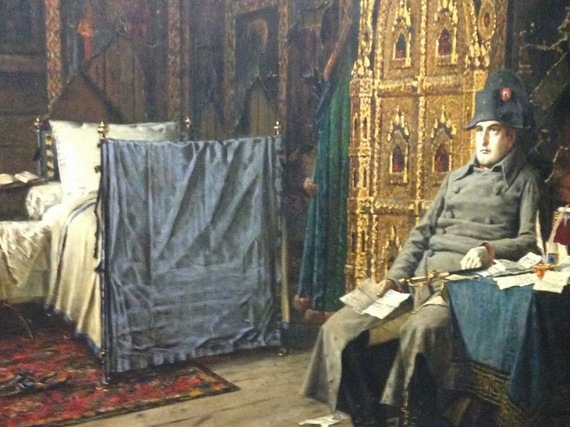 Napoleon decamped in Kremlin Cathedral. See close up of bed in next photo, Museum of 1812, Moscow 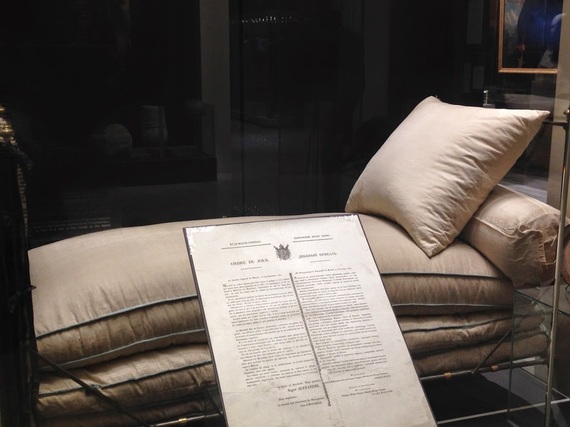 Napoleon’s Camp Bed. Left behind when he fled the Battle of Borodino, Museum of 1812

Hotel tourism is going strong worldwide and Russia is no exception. In Moscow, don’t miss the view of Red Square from the o2 restaurant at the Ritz Carlton. But the story behind the almost opened Four Seasons couldn’t be made up. The building is the old Moscow Hotel. A stark Stalinist structure with two very different facades. The story is that planners presented Stalin with two divergent designs for the hotel and he signed across the bottom of both designs. Fearful of asking their leader which design he meant to approve, both were built. The facades will remain divergent as a nod to historic (and political?) preservation. 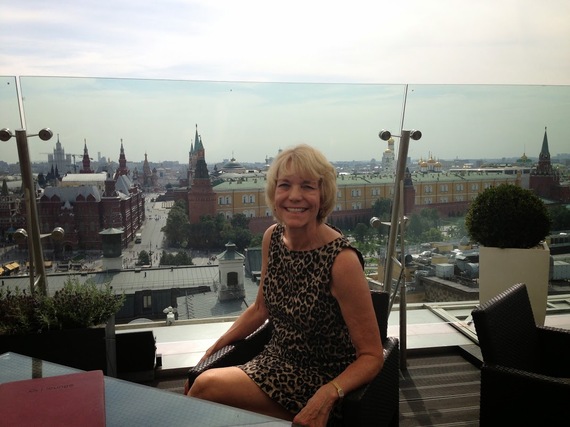 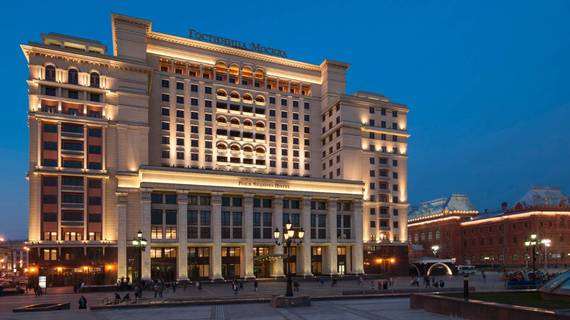 A park littered with statues no longer in political favor has long been a stop for tourists. So why list it here? There were some changes I wish to note since my last visit 5 years ago. There are new additions. A statue of Sakharov now has pride of place, not as a fallen hero but as a memorial, or so it was interpreted to me. A phalanx of faceless heads has been added behind the Stalin statue to denote those who suffered and died in his Gulags. His nose is still missing, in a sphinx like reference to when it was toppled. There is also the statue of Felix Dzerzhinsky, founder of the KGB which is currently being renovated. Rumor has it that it will be returned to a pride of place in a Moscow square. 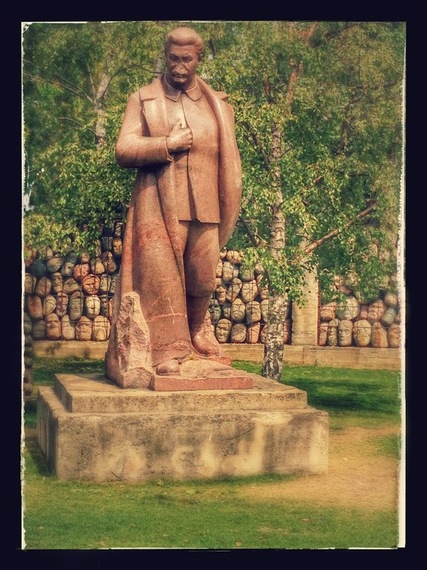 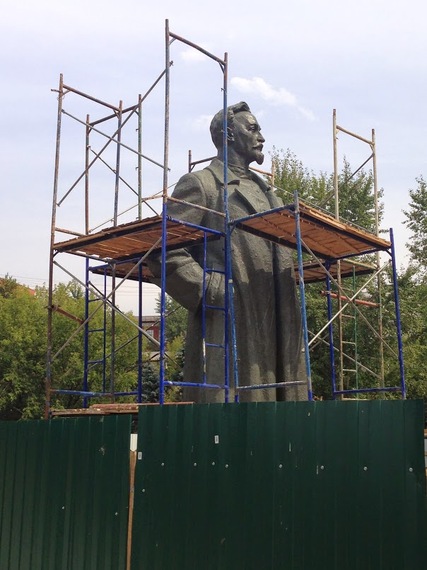